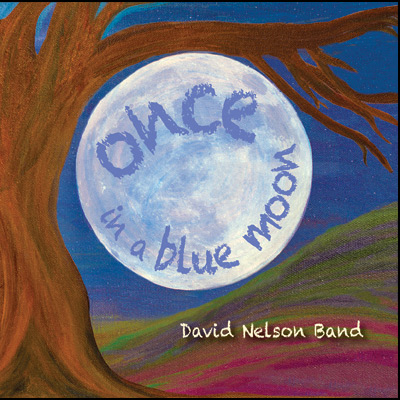 NOW AVAILABLE! FIND IT ON:

This album is dedicated to my friends

David Nelson grew up playing and listening to music with Jerry Garcia, absorbing similar
musical influences with his friend. His music draws from these influences with roots that
spread from Americana to psychedelic without missing a beat. Along with Nelson’s
bandmates, roots and jam veterans, David Nelson,Barry Sless, Mookie Siegel, Pete Sears and John Molo,
the David Nelson Band celebrates their twentieth year with the release of Once In A Blue
Moon. The release features 8 Nelson compositions (one co-written with Garcia’s lyricist
Robert Hunter) a Pete Sears original, a Bill Monroe song, and a heavy instrumental dose of
conversational, interactive improvisation by these roots-jam masters.
“The David Nelson Band embodies the Grateful Dead tradition of literate musical
conversation, presenting sharp and engaging songs in a context of group improvisation.
With 20 years of history and a unique collection of original songs, the DNB performs with a
deeply satisfying comfort, warmth, and depth. It keeps all those American forms,
bluegrass, blues and a little bit of jazz. They’re people who listen to each other and sort
of architect this music together as they go. They’re my favorite band in the universe.”
— David Gans, host of the nationally syndicated Grateful Dead Hour
“DNB is impossible to categorize. You’ve got your jazz, you’ve got your blues, you’ve got
your country, and you have your acid rock, psychedelic or whatever. That’s what I like
about seeing the David Nelson Band. There’s such variety—it’s such a satisfying
experience. They’re basically my favorite band to see.”
— Bob Minkin, rock photographer who’s work has a appeared in
Rolling Stone, Relix and Time Magazine